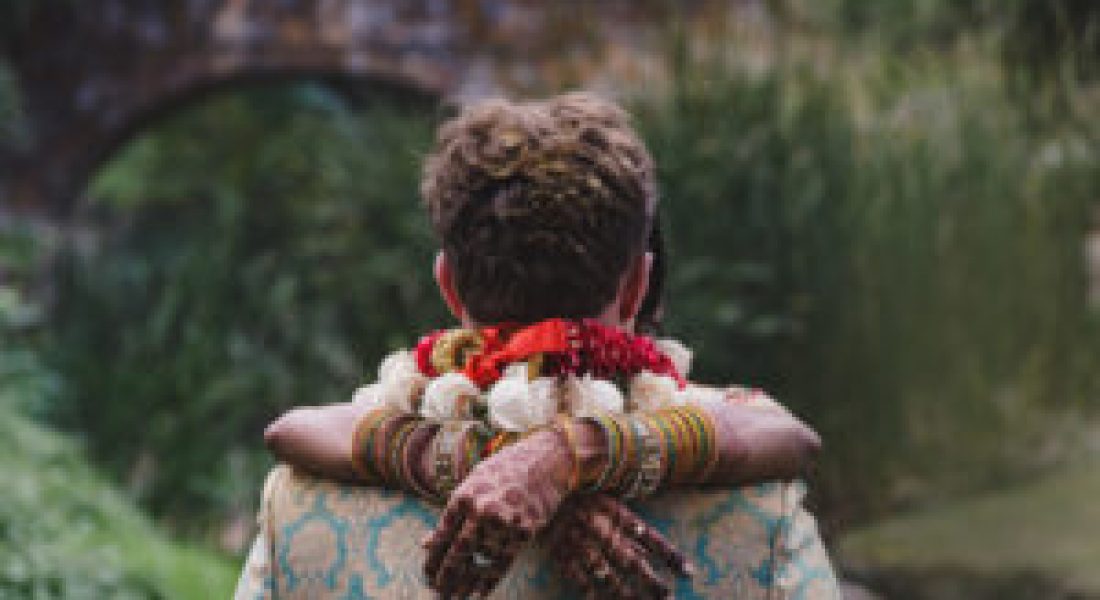 Once upon a time, Saumya Tayi and Kyle Blackburn’s love story might’ve seemed unlikely. Now, there’s an app for that.

If you tracked Saumya Tayi and Kyle Blackburn’s paths on a map, the chances of those trails intersecting would seem infinitesimal. Saumya’s roots begin in India, where her parents lived before immigrating to Plano in the 1970s. Kyle, on the other hand, grew up in a tiny town of 2,000 in rural Kentucky. Medical residency brought him to Dallas, where cross their paths did— the new-fashioned way: through a dating app. Coincidentally, the two lived in the same apartment complex, which Saumya says contributed to their relationship feeling comfortable early on. “On a weeknight, I could get home from work and change into sweatpants and go over to his apartment and watch a movie,” she says. “We got to be a part of each others’ lives really easily.” They were engaged two years later and planned a wedding day that seamlessly blended their respective cultures. On November 3, 2018, two families—and two worlds—came together in a loving celebration of two people nothing could keep apart.

The Game of Love
Saumya and Kyle’s day started at 2:30 p.m., with a traditional Hindu ceremony in Arlington Hall’s formal garden. In the Andhra region of India, where Saumya’s family hails from, it’s customary to play games during the ceremony. One involves throwing turmeric-coated rice onto each other to see who will “wear the pants” in the relationship; another dictates that whoever jumps higher to place a floral garland around their betrothed’s neck will get to choose any future children’s names. “Kyle stood up on a chair with the garland so I couldn’t reach him,” Saumya laughs. “We had a lot of fun.”

All Dressed Up
For the traditional Hindu ceremony, Saumya donned a kanchi silk sari crafted by artisans in her mother’s home state in India. She chose the yellow color to match the changing leaves outside Arlington Hall. She wore a traditional Indian style of jewelry called Temple jewelry, with different pieces gifted to her by different members of her family. “It was like I was wearing a little piece of everybody,” she says. Her earrings, called jhumkas, were a gift from her aunt and uncle. The piece on her head, called a tika, and her choker were gifts from her maternal grandmother. She wore rings given to her from both of her grandmothers and bangles from her paternal grandfather.

The Eyes Have It
Saumya chose Kyle’s outfit for the ceremony from a maker in India. “Kyle has very blue eyes, so a pale blue was kind of a no-brainer,” she says.

The Right Blend
Saumya and Kyle wanted a day that honored both of their respective cultures and upbringings. “We had it on our mind that we wanted to blend both of our backgrounds into the day, and it ended up being somewhat effortless,” Saumya says. They had two ceremonies—a traditional Hindu ceremony at 2:30 p.m., followed by a western exchange of vows at 6 p.m. With its multiple event spaces, Arlington Hall was the perfect host—and a favorite of the bride and groom, who live nearby and can now regularly reminisce about their special day.

A Warm Welcome
Traditional Hindu ceremonies begin with a baraat, a procession in which the groom is paraded to the ceremony site to greet his bride, accompanied by Indian musicians. Instead, Saumya and Kyle chose the Brian Murray Jazz Band to represent Kyle’s Southern roots and love of jazz music. “We both love the second line wedding tradition in New Orleans … so we thought that would be really fun for Kyle to do with his groomsmen,” Saumya says. “It’s exactly what you would do traditionally in an Indian wedding, just with different music.” Upon arriving, Saumya’s family presented Kyle with a varmala, or a colorful floral garland.

Bridesmaids
One of Saumya’s favorite parts of the day was seeing her bridesmaids—especially those who aren’t Indian—wearing their saris. “A few I’d been friends with since elementary school, and of course we’d always talk about our weddings one day,” she remembers. “They’d say, ‘I want to wear a sari at your wedding!’ So it was fun to see them all looking gorgeous.”

Take Two
A western exchange of vows took place at 6 p.m. in Arlington Hall’s Allman Pavilion. Because Hindu ceremonies are so elaborate, Kyle and Saumya made the purposeful decision for the western ceremony to be simple and scaled back. She chose a dress with a classic, understated silhouette and added a pearl necklace from her maternal grandmother’s wedding 60 years ago. Kyle—who is passionate about music—selected acoustic versions of some of his favorite songs for LeForce to play. Reciting their vows, which Saumya and Kyle wrote themselves, ended up being one of Saumya’s favorite moments of the day. “There was something about that moment—like I could feel the energy of everybody around us,” she says.

Beauty in Blooms
Saumya had one last surprise for her guests: a floral-embroidered third dress, called a lehenga, created by Indian designer Sashi Vangapalli.

A Perfect Palette
“A lot of events I go to these days have a white color palette, which is so beautiful,” Saumya says, “but I think the Indian girl in me was like, ‘No, it’s a wedding! It should be a celebration of color!’ ” Along with her florist and wedding designer, Elegant Affairs, Saumya came up with a floral color palette of dusty blue, wine red, and peach. Saumya was particular about wanting sea hollies for their beautiful shade of blue, and Elegant Affairs delivered in every way. “I loved walking into that tent,” Saumya says. “It was exactly what my mom and I had envisioned.”

Coffee and Tea Reception
Following the Hindu ceremony—while the bride, groom, and bridal parties changed into their western attire—guests were treated to a coffee and tea reception. “We made it a cross between a western tea and an Indian tea,” Saumya says. Espresso and Indian chai were served with tea sandwiches and scones from Food Glorious Food along with Indian snacks from Kumar’s in Plano.

Menu
“We worked with the Food Glorious Food team to come up with a fusion menu [for the reception],” Saumya says.

Honeymoon
A three-week trip to India this November for their one-year anniversary.

Number of guests: 220
“At most Indian weddings, there’s typically like 500 people,” says Saumya, who says she and Kyle wanted something much more intimate. At 220 people, it was still a sizable wedding, yet, laughs Saumya: “All of our Indian vendors were like, ‘Oh my gosh, that’s such a small wedding!’ ”