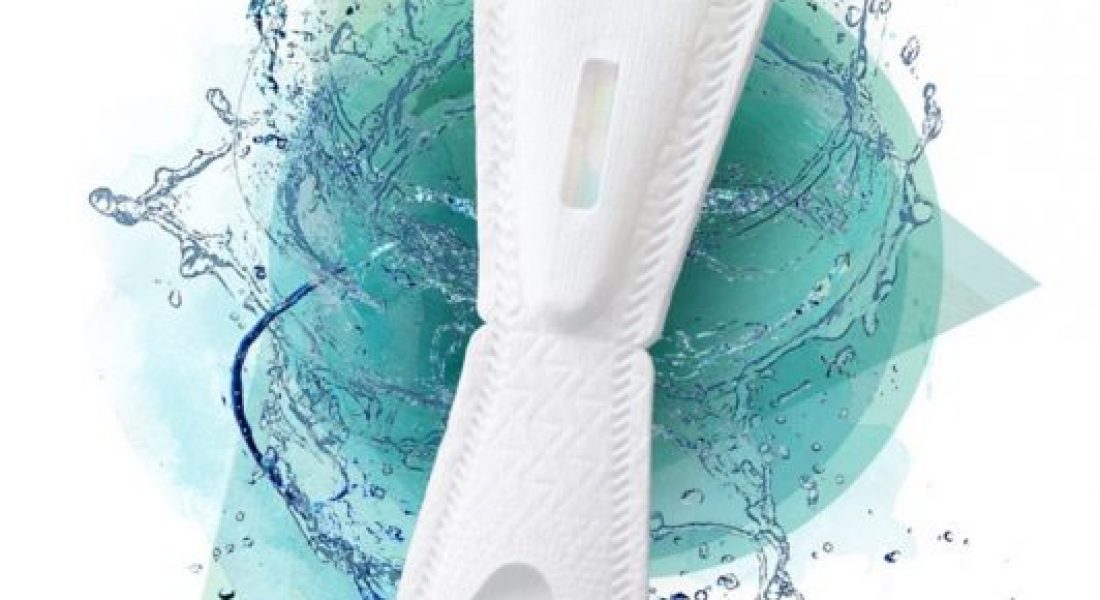 If you’re anything like me, taking a pregnancy test isn’t a one-and-done affair. Between too-early testing and incessant confirmation, I’ve probably gone through at least a dozen pee sticks per pregnancy. And sadly, all of that plastic has ended up in the landfill.

However, times could be changing. That’s because the first-ever flushable pregnancy test is here.

Founded by Bethany Edwards and Anna Simpson in 2015, the company behind this newest innovation is Lia Diagnostics. “The at-home pregnancy test is still the same stiff plastic relic highlighted in movies for its lack of privacy,” Edwards said at TechCrunch’s Disrupt Berlin 2017 conference — where the Lia pregnancy test won the grand prize in the Startup Battlefield competition. “Someone finds the test in the trash and breaks the news before you can. Worse yet, they’re bulky, expensive and add over 2 million pounds of plastic to landfills every year.”

So how does it work, exactly? Much in the same way as traditional pregnancy tests, as it turns out. Like traditional pregnancy tests, the stick reacts to urine to display results: One line if not pregnant and two lines if pregnant. The Lia test does have a larger “collection” area on which to pee, as well, but it’s the material it’s made of that sets it apart from the rest.

Because the Lia test is made from a special paper that disperses in water and biodegrades, it can be flushed or composted. This means women will no longer need to hide their pregnancy tests in trash cans, or to pee on sticks in public bathrooms (or otherwise sneak around) if they desire privacy. Oh, and it’s fantastic news for the environment, too.

Lia has already received FDA approval for its flushable test and it has plans for selling them online starting in mid-2018, according to TechCrunch.

Initially, tests will be available on the company’s website and then eventually, they will be sold on Amazon. The anticipated cost will be between $9 and $22. What’s more, there will be an option on the Lia website for visitors to donated a test for $10 to a partner organization, like Planned Parenthood Global or SOS in Canada.

Pretty cool, huh? Who knows…maybe the next time I pee on sticks three at a time like this…

…I’ll only have to feel guilty about the wasted money and not my negative impact on the environment.

What do you think of this flushable pregnancy test?

The post The first-ever flushable pregnancy test has arrived & it's about time appeared first on BabyCenter Blog.