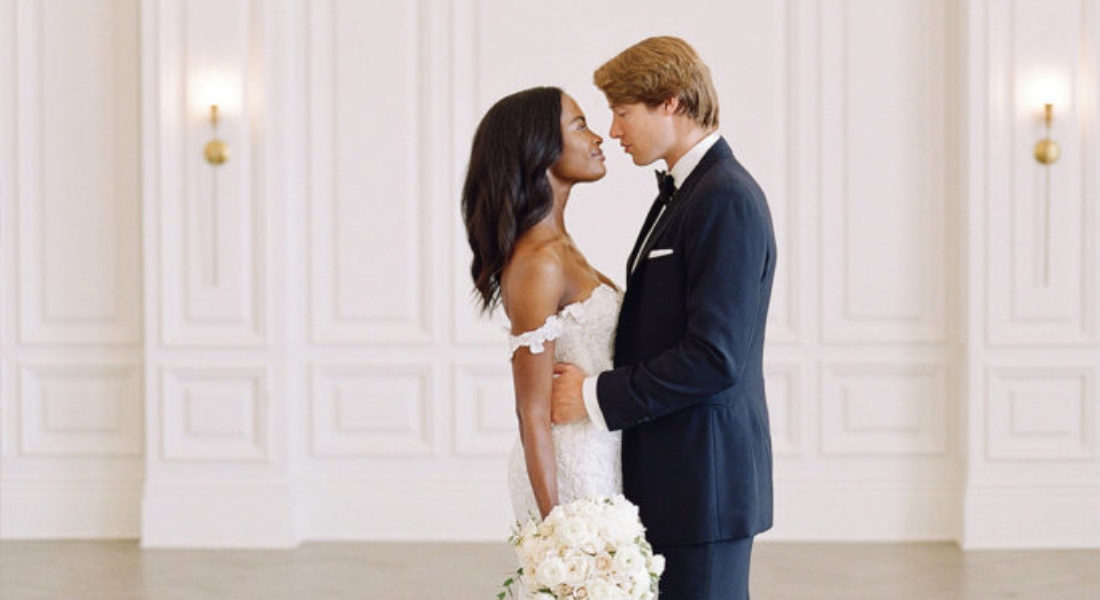 Olivia Whittaker jokes that she met Collin Mangrum the old-fashioned way: online. The pair first matched in 2014 but eventually lost touch after Olivia moved to Los Angeles. But two years later, they reconnected and haven’t been apart since. In 2018, Collin planned the perfect proposal: a faux photo shoot where Olivia, a model, thought she would be working. She was surprised when Collin arrived and dropped to one knee—complete with an engagement party afterward. Their romantic nuptials were held in the intimate 19th Floor Ballroom of the Adolphus Hotel on June 1, 2019, with greenery adorning the historic venue.

“I’d always had a specific vision for the dress I wanted to wear,” says Olivia. She found the one at a Galia Lahav trunk show at the flagship store in Los Angeles.

Collin and Olivia opted to forgo a first look, so portraits were done separately before the ceremony. Afterward, the pair took advantage of the Adolphus’ lobby and the French Room for pics with the whole party.

Olivia and Collin were one of the first couples to host their wedding in the historic 19th Floor Ballroom after its renovation and reopening—that allowed the bride some creative leeway as there were not many photos of ceremonies in the space when she booked.

“It was such a special moment when the doors first opened and I walked down the aisle with my dad,” says Olivia. “Walking in, I didn’t see many of our guests or hear any of the beautiful music our string quartet was playing—it was just all Collin!”

“I wanted the space to feel lively and lush, so I loved the floral displayed all around the ballroom and the greenery dangling from the ballroom’s gold sconces,” says Olivia. “GRO’s custom white cross covered in florals was so special for us, as well. We wanted to make sure it was known who that day was about and who our marriage would honor.”