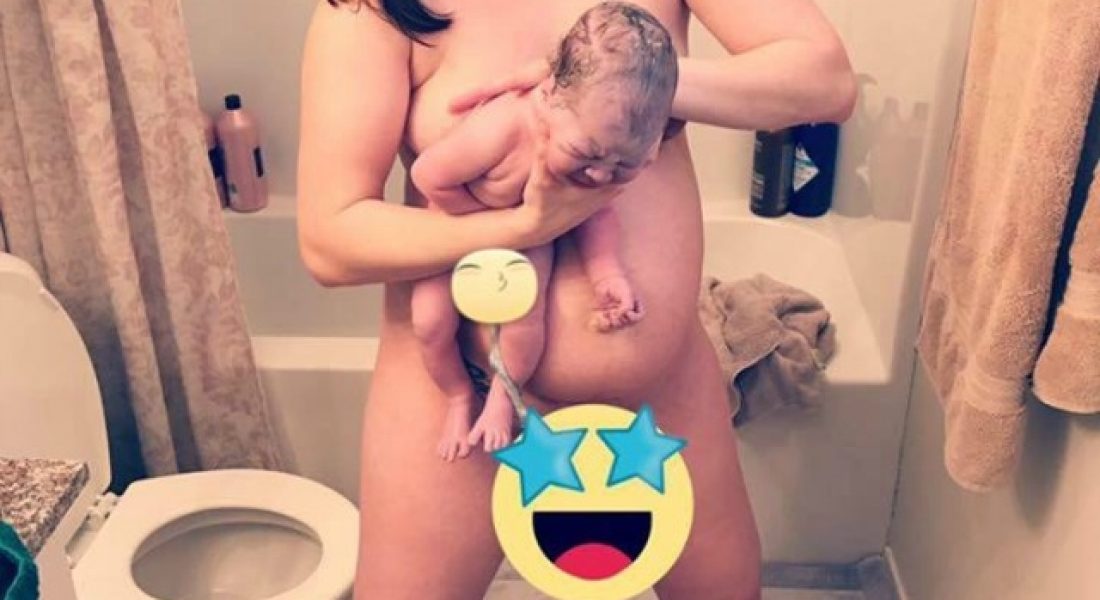 New mom-of-two Marissa Heckel believes women should give birth the way they want. That’s why she delivered her son herself in a completely unassisted home birth. Heckel shared a photo of her empowering experience on Facebook, where it has since inspired many other moms-to-be.

Her photo is about as raw as it gets. You can see pools of blood on the floor, and her son’s umbilical cord. I’m looking at the joy on Heckel’s face as she holds her new baby, but it’s as if I can also feel the trembling in her legs. After all, it took 36 hours of hard labor for this moment to happen.

But why did this Ohio mama want an unassisted home birth — meaning no medical professional, not even a midwife, was present when her son was born? Her story actually started years earlier.

As Heckel wrote in a post on Facebook accompanying this incredibly honest photo, “Three years ago…I delivered my daughter in a hospital drug free. After a horrible experience being bullied about my birth plan and harassed throughout my labor, I decided to stay at home and deliver my son upon finding out I was pregnant.”

She says her hubby was completely supportive of her choice, even though he worried about her during labor. Still, he was there every step of the way. She explained, “When the contractions and the pressure came my husband was bedside holding my hand. It was actually romantic although I was practically roaring at this point.”

Heckel admitted to BabyCenter, “Getting through labor is very challenging. I see it as a test. If I’m willing to go through all that pain for my baby, I’ll be prepared for anything in raising him.” She added, “I labored all through the night as I had him at 11:10 in the morning. I tried to find relief with a shower for my back labor and even tried multiple baths — nothing helped. I finally just put my hands on the wall and took it knowing something good would come from all of it.”

And it did. Her son was born healthy, and his strong mom, who gave her last, mighty push while standing up, got the chance to prove, as she says, that women’s bodies were made to birth babies.

Incidentally, Heckel’s son was 9 pounds, 8 ounces at birth. Gulp. As she jokes, “He’s no average sized baby as my husband is so tall (6ft7). So if you’re afraid or thinking you can’t do it, YOU CAN!!!”

After sharing her photo on social media, Heckel told BabyCenter, “The reaction has been extremely heartwarming. Thousands of moms and dads see inspiration. And while with every story there will always be some who oppose, the majority of comments have been positive.”

Personally, I admire Heckel’s confidence. I know from experience how intense the pressure can be to get that epidural when you choose a hospital birth.

Still, an unassisted home birth wouldn’t be for me. I’d just want to know a doctor was nearby in case I, or my baby, needed help. Especially since the last time I gave birth, I lost a ton of blood, and that was scary. I’m not sure how I’d cope with massive blood loss in my bathroom alone at home.

In the end, no matter how you give birth, it’s wonderful to do it your way if you can. Many factors can veer out of your control during birth, though. So even if you endure an experience that didn’t go according to your perfect plan, I’ve learned after loss that holding a healthy baby in your arms is really all that matters.

Did you have the birth experience you wanted? Would you try an unassisted home birth?