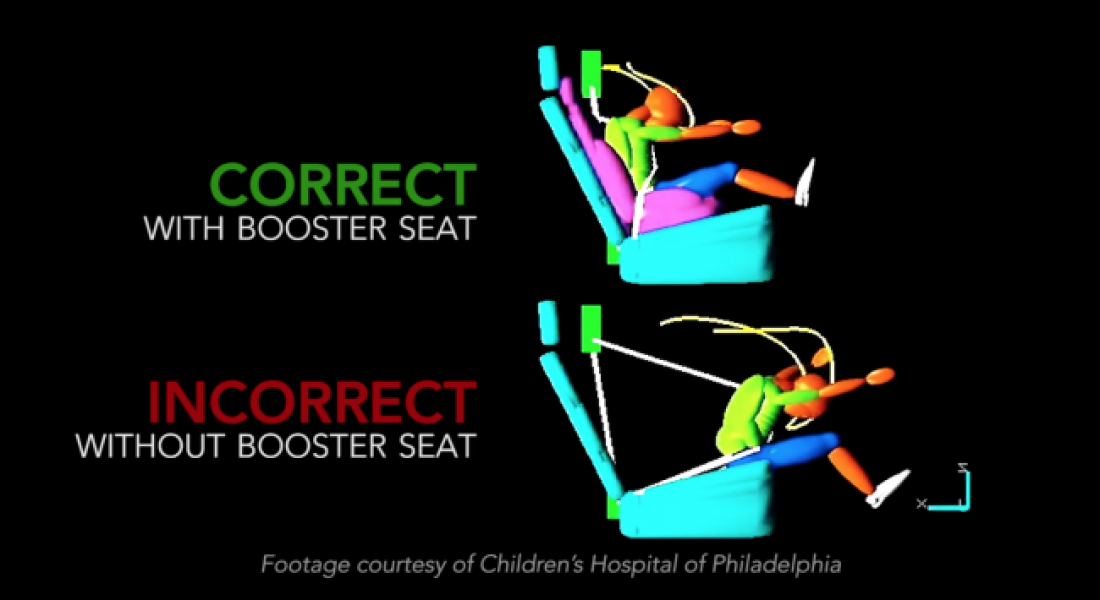 My 6-year-old son has been bugging us lately to ditch his booster seat. “But look, I’m big enough now!” he announces, sitting up as tall as he possibly can in the minivan. “Um, nope. Sorry, buddy. You still have many more years in that thing.”

He can complain all he wants, but I’m not budging on this one — especially after watching this now-viral video from Eastern Virginia Medical School. The video, which was posted on Facebook by Eastern Virginia Medical School, shows exactly what can happen when kids stop using a booster seat too early. With nearly 8 million views and over 174,000 shares, it’s clear the video’s message has struck a nerve.

In the video, a mother and son hop into their vehicle and head off to what I’m assuming is a soccer tournament. Nothing seems out of the ordinary. Kid in the back seat? Check. Everyone buckled? Check, check. Mother and son are chatting in the SUV when an oncoming car suddenly veers into the wrong lane. Their lives change in an instant.

After the mother regains consciousness, she hears sirens wailing. She notices she’s bleeding and then discovers her lifeless son in the back seat. The frantic mom ends up riding with her son — who is hooked up to multiple monitors and machines — in an ambulance and then accompanies him while his injuries are evaluated at the hospital.

“Mom, tell me again where he was at in the car,” a doctor asks.

“He was in the back,” the mom replies.

“Was he in a booster seat?”

Here’s the thing, though: Her son should have been in a booster.

Dr. Phillip Thomas, MD, explained that children who aren’t in booster seats when they should be (and are in involved in a car accident) face the risk of damage to vital organ damage, large vessels and internal structures of the neck — like the trachea, spinal column and crucial vasculature.

“Many parents think as their child is in the back seat with an adult seat belt, that their kid is safe,” Thomas said. “And it’s just not the case.”

Here’s a look at the criteria your child needs to meet before ditching the booster seat for good:

2) Back rests against seat, with …

4) Belt is across shoulder and chest.

Furthermore, the U.S. Centers for Disease Control and Protection (CDC) recommends that children should always ride in the backseat of a vehicle until at least the age of 13.

“Some say, ‘Oh, they’re old enough. I don’t need to use the booster seat anymore’ And really, they do,” said Cathy Peterson, a registered nurse who was also interviewed in the video. “Because if it falls across the abdomen, or it’s not across the chest right, that’s when your child can be injured the most.”

In fact, as one doctor points out in the video, an unrestrained child traveling at 30 miles per hour will experience the same force as if they fell out of a third-story window.

So even if you’ve already taken that booster seat out of your vehicle, I hope this video inspires you to dig it out of the closet, or dust it off from the garage. Because your child’s life could literally depend on it.

What do you think of this video? Were you aware that kids are recommended to be in booster seats this long?