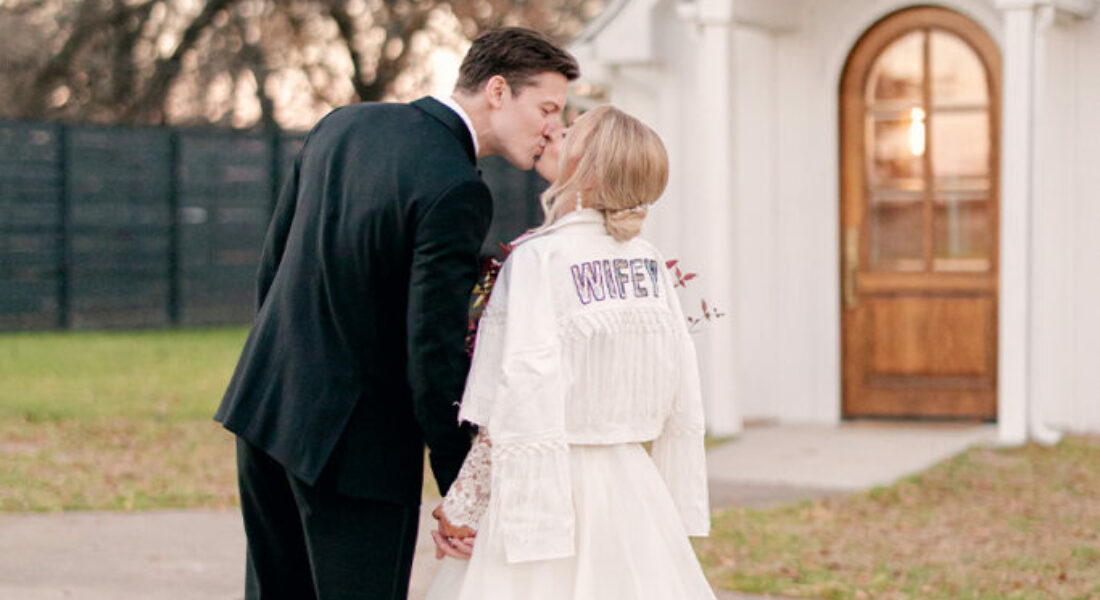 Mild Texas temps helped a December wedding feel like fall—with seasonal foliage to spare—for a stunning Emerson affair. After four years of running in the same friend group at The University of Oklahoma, Blair Dwyer and Mason Haunschild found themselves living down the street from each other in Dallas. The pair soon began dating and four years later got engaged during a getaway trip to Charleston. Early into planning, Blair dreamt of a fall wedding at The Emerson. Even in December, the venue’s vibrant foliage played perfectly off the “funky black tie” style of the day. Disco ball decor, velvet accents, and hanging florals were included to add dimension and moodiness to the all-white venue. While the couple downsized their guest list of 200 to 100 due to COVID, Blair says the scaled-down size made the day feel even more special and intimate. The bride’s favorite memory was her final dance alone with her new husband under all the disco balls. “We got to breathe for a second before we left,” she remembers. “That was really special.”

Blair’s bridesmaids all gifted her with a sequin and fringe “wifey” jacket on the morning of the wedding. Though the couple’s original photographer bowed out just nine days before the wedding due to COVID concerns, KC was able to enlist photographer Charla Storey in the knick of time—with beautiful results.

Tables were covered in linens in moody hues then accented with seasonal flower arrangements and taper candles in blush tones. “Blair wanted a romantic and modern wedding with beautiful fall and early winter tones in burgundy, mauve, blush and hints of rust,” says Hailey. “And lots of beautiful candlelight.”