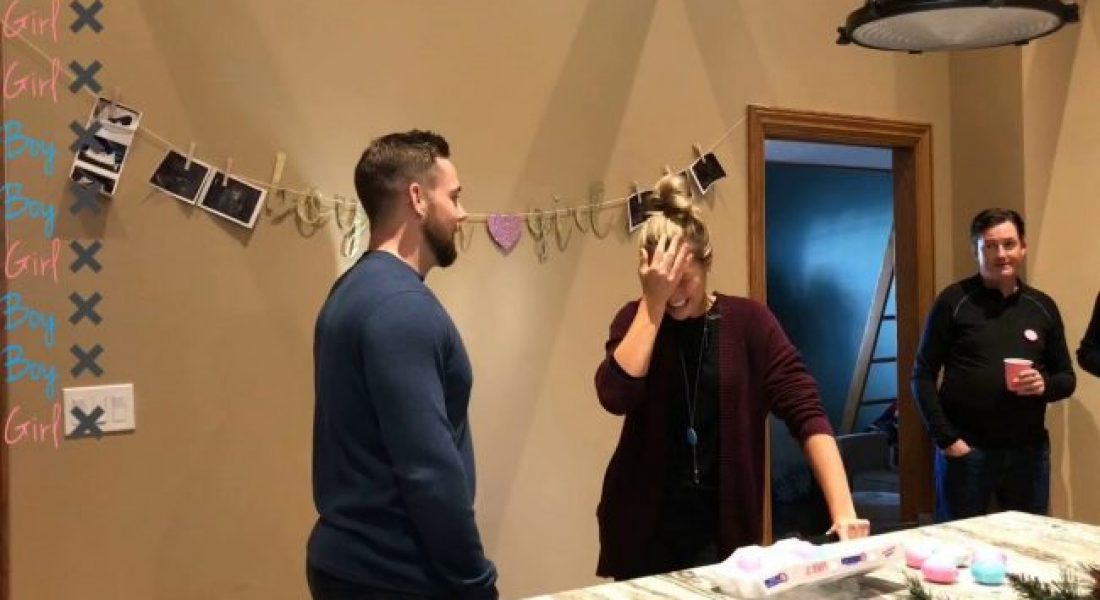 Kentucky couple Molli and Dallen Reber recently posted a totally new, totally fun way to go about a gender reveal. The couple, who are expecting their first child in June, put a new twist on Jimmy Fallon’s egg roulette. And, the results are super awesome and egg–citing.

So they could be surprised too, one of Molli’s two sisters was informed of the baby’s gender and prepared a dozen eggs, six blue and six pink. All the eggs but one would be hard-boiled. If the raw egg was blue before being smashed against Molli or Dallen’s forehead, the baby is a boy. If the egg was pink, then baby is a girl.

The Reber’s game of roulette unfolded so perfectly. The couple took turns working their way through the carton of eggs until there were only two left — one pink and one blue. Molli and Dallen then decided to do the last two eggs at the same time. Knowing their gender wait would soon be over, the couple counts to three and…

Molli, who thought they were expecting a boy, was thrilled. She told TODAY, “I was super-surprised…[But], I come from a family of all girls, so it seems fitting it was a girl.”

As a fellow pregnant lady, I watched Molli and Dallen’s video with bated breath. I know how those last moments before finding out your baby’s gender are. And, as a fellow first-time-girl mom, I am so excited for the Rebers.

Here is how we revealed our baby coming this February is a girl. Not as fun and exciting, but what can you expect when it’s your fifth baby?

Side note: My boys have gotten used to the idea of having a sister and are getting pretty excited to welcome her next month.

How did you reveal your baby’s gender?

Photo and video provided by Molli and Dallen Reber.

The post Couple invents the cleverest and most EGG-citing gender reveal ever appeared first on BabyCenter Blog.