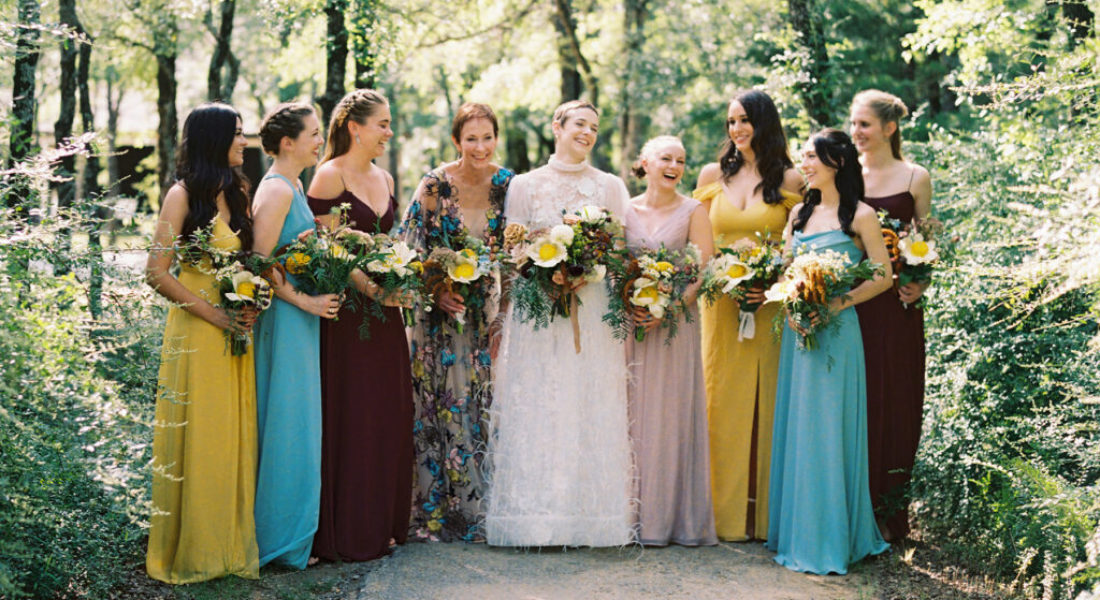 When meeting his future bride for the first time, Chris McElrath didn’t just break the ice—he broke the whole margarita machine. (Or so he thought.) “It made a weird sound because it was out of mix,” he remembers of the med-school kick-off gathering at Lizzie Cochran’s parents’ home, “so I had to go to the hosts and apologize.” The classmates struck up a conversation and found an instant, easy connection. At an orientation days later, someone asked how long they’d been married. They weren’t, of course, but after three-and-a-half years of dating, Chris asked Lizzie if she’d do him the honor. With a small window of time between graduation and residency, the pair made quick work of wedding planning, securing Briarwood Retreat Center for the three-day, camp-style celebration Lizzie, a former camp counselor, had long envisioned—“a family reunion before the family was even created,” as she describes it. Though they’d graduated weeks earlier, it was on May 26, 2019—when they said “I do” in front of family, friends, and (of course) a margarita machine—that the pair officially became Dr. and Dr.

Hosting their wedding at a camp not only provided built-in entertainment for the weekend—as they were able to utilize the facility’s zip lines, rock-climbing wall, archery range, and more—but it was ideal for creating the communal vibe Lizzie and Chris were after. “Because everybody had so much time to get to know each other, everybody was dancing with everybody and laughing at the same jokes,” Lizzie says, “and it really felt by the end like we were all celebrating as a single unit as opposed to two different factions hanging out in the same location separately.” Adds Chris: “Different people across groups you would never suspect are still in touch and talking to each other to this day.”

More than 100 loved ones joined Chris and Lizzie for a three-day party that not only consecrated the happy couple’s love but also highlighted the varied talents of their nearest and dearest. Throughout the weekend, friends and family hosted yoga sessions and art lessons, performed a custom wedding march on violin, and immortalized Lizzie and Chris’ pet cat, Radley, in spray-paint mural form. “There’s only so many spots for official titles within a wedding, and we have more people that we care about than we could give a ‘best man’ title to,” Lizzie says. “This allowed us to honor and showcase those people and those relationships in a unique way.”

A bride’s gown undoubtedly sets the tone for her big day. But in Lizzie’s case, the dress worn by her mother, who was also her maid of honor, was just as pivotal to the day’s aesthetic. On a gown-shopping trip to New York, both women found dresses by the same designer. Lizzie pulled hues for her bridesmaids to wear from the palette of her mom’s floral-print stunner. “I knew I didn’t want a monotone wedding party,” she says. “Everything appeared unified but not cookie-cutter.”